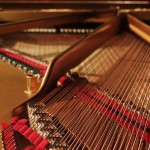 “Can you hear it?” he says, playing notes in the middle octave. “This D# has a different tone, it’s louder… it sticks out to me.” I am really listening, intently focusing to hear the minute differences while scales are repeated up and down around the D#. I soon understand that Marshall is not your average piano player. More scales. “There are others too” he says, with his head down close to the keys…“this one and this one too…it’s a bit weak or soft; can you hear it?”
Marshall lives in a share house in the inner west. He’s tall and rangy; a young PhD candidate who, when he isn’t documenting a particular relationship between the human brain and microbe colonies in the digestive system, likes to play the music of composers like Joep Beving and Phillip Glass.
I mark with chalk the hammer woods of 7 or 8 notes Marshall shows me; 1 stroke for a little loud and brassy, 2 or even 3 strokes on others for louder still. One note is marked with a sideways stroke for being too soft and weak.
Taking the action out of the piano, I go to work with the voicing tool, stabbing the needles into special places in the tightly stretched wool of the hammer heads. I replace the action to check tone and volume of the notes, then remove it again for more work, repeating the process until all the notes seem even. Time passes before I’m satisfied and I call Marshall to check the work.
“What do you think?” Marshall plays the scales. “Yes, that’s much better … much better” he says. Then, lowering his head to the keyboard and striking an octave forcefully while tilting his head to the side he says … “now, there’s a buzzing sound when I play the ‘A’…Can you hear it? Can you hear that buzz?”